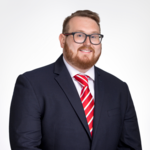 Justin graduated from the University of Texas School of Law. While in law school Justin was an editor for both the Texas International Law Journal and the Texas Journal of Oil, Gas, and Energy Law. He worked as a law clerk during his final three semesters. Since graduating, Justin has taken classes on appraisal methodology from the Institute for Professional Taxation.

Justin currently resides in Dallas. In his free time, Justin enjoys watching sports of all varieties, managing his fantasy football teams, attending concerts, and spending time with his family and friends.