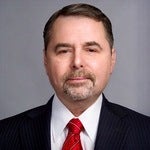 Rick Fine has been active in public affairs for more than 40 years at the local, state and federal levels. He has been a licensed attorney since 1979, working in both the public and private sectors. Over the past two decades, Rick's practice has focused primarily on property tax valuations, business incentives, economic growth, and state and local tax policy issues affecting major taxpayers.

Rick subsequently joined the legal staff of the newly created State Property Tax Board (now the Property Tax Assistance Division of the Texas Comptroller's Office), where he authored the first section-by-section explanation of these new state laws for citizen use. He spent the next two-and-one-half years assisting local governments and taxpayers in establishing the newly created appraisal districts, building lasting relationships with state and local officials and organizations. In 1981,

Rick drafted an omnibus revision bill to the Property Tax Code — dubbed the “Fine-Tuning Bill” — to substantially improve the new Code prior to its full implementation on January 1, 1982. Governor Bill Clements deemed the legislation so essential that he called a special session in the summer of 1981 to ensure its passage.

In December 1981, Rick left state government to enter private practice as a member and partner of Ray, Wood & Fine, LLP. Rick added property taxation, business incentives and school finance to the firm's law practice, then developed these areas into the firm's mainstays representing both public and private sector clients there for over 20 years. Upon joining the firm, Rick authored the derivation and disposition tables — correlating past and present statutes to facilitate legal research — that West Publishing Company has since included in its editions of the Property Tax Code for reference by attorneys and judges.

Rick subsequently co-founded the Austin office of Duff & Phelps, serving as its Austin City Leader until he returned to the private practice of law in April 2012. Rick held the position of Managing Director at the firm, providing consulting services in the areas of property tax and business incentives. Upon leaving Duff & Phelps, Rick also became a partner in the consulting firm Property Tax Partners. Rick serves on the Board of Directors of the Texas Taxpayers and Research Association, the state's most influential research and advocacy group on state and local taxation and business incentives issues.

Rick is also a member of the Step Onward Foundation board of directors, a 501(c)(3) nonprofit charity providing support and services to young adult survivors of homelessness and health crises.

Rick received his J.D. from the University of Texas School of Law in 1979 and his B.A. in political science from the University of Houston in 1975, where he was elected student body president. He is licensed with the Supreme Court of Texas, the Supreme Court of the United States, the United States Court of Appeals, Fifth Circuit, and the United States District Court, Western District of Texas. Rick is a past Chairman of the State Bar of Texas Property Tax Committee and served on the Texas Comptroller's Property Value Study Technical Advisory Committee from 2002 to 2009.